You are here: Home / Other Pets / Buff Orpington Chickens: The Best Guide

The Buff Orpington is one breed that speaks of the English barnyard hen.

American folks always picture a plump, stately, feathered hen with beautiful colors that is going about her business in the barnyard as if she owns the tard and is definitely not in a hurry!

The Orpington is a fairly recent breed created by the vmind of a man who felt that it was possible to create a two purpose breed (meat and egg) that was better and bigger than existing breeds.

In this article, we talk about the Orpington’s temperament, egg production abilities and recognized varieties with a focus on the ever popular Buff Orpington chickens.

The late 1880s “chicken fever” witnessed a die down in England.

People had turned from the norm of breeding and keeping all sort of strange and exotic birds for curiosity and fun, to breeding a more useful and practical bird.

A good example of such a person was William Cook – a coachman living in the pretty town of Orpington in the county of Kent, England.

He only kick-start his interest in chickens until later in his life, but he was amazed bt the chances of breeding a better fowl for both egg and table production.

He started by selecting that were good layers and suitable table size. The 3 breeds he originally used were Plymouth Rocks, Langshan, and Minorca.

In 1886 he “revealed” the Black Orpington breed- which turned out to be an almost overnight success in England thanks to the many publicity it received. It was bred to have a black color to hide the soot and dirt that was almost everywhere in cities at that period.

The second color revealed was the Buff which remains the favorite color of Orpington chickens. Next in line was the Splash, White, and blue colors of the bird.

When Mr Cook unveiled his birds to the public eye he received trending reviews in the UK. It quickly became the most popular breed in the land and within ten years was being exported to other countries, including the U.S. There was even an Orpington ranch in South Africa! How cool is that?

When Cook personally traveled to the US to sell his line of birds he met huge success. Evidently he was an awesome salesman and very fastly got poultry folks and farmers interested in this multipurpose breed. 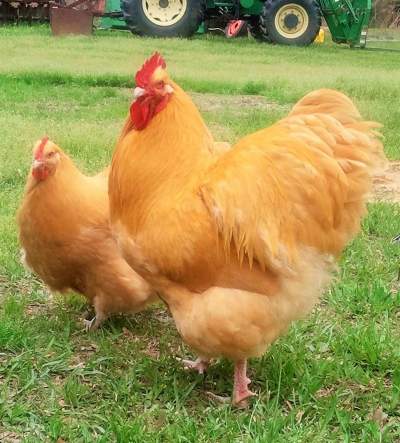 Now, if you can trace your mind back to the start of this article, you will remember quite well that the original back Orpington was created from the stock of Barred Rock, Langshan, and Minorca.

Not one of these breeds have anything remotely ‘buff’ about them, So Mr Cook used gold spangled Hamburgs, buff Cochins, and Dorkings to create the Buff Orpington. There are also rumors that an old breed known as the Lincolnshire buff was used, although this was denied by Cook.

At the time this was extremely controversial and to this day is unusual to use several other breeds to create different color birds of the same name! If you think of the “ORPINGTON” as a brand rather than a breed, it would totally make sense!

The buff was designed to fulfil a need for a buff colored chicken at the time. It is a heritage chicken that has since become a very loved specie of lots of people.

They were the most loved breed of Queen Elizabeth. The Queen mother and her other floacks won several awards for their grace and beauty.

The Orpington was said to be endangered until 2016.

Thanks to the support by lots of backyard chicken keepers, the breed has now been removed fron the American Breed Livestock Conservancy list. The refreshed interest in this favorite has seen the numbers of Orpingtons- majorly buffs rise on a steady basis.

The bird’s appearance should b heavy, broad body with a low stance, fluffed out feathers and a curvy, short back.

The bird should be well feathered with broad, smooth feathers. Shanks and Feet should be pinkish nwhite in color and clean. Plus the flesh is white in color. The beak also is a pinkish white. Eyes are reddish bay color, comb, wattles, and earlobes should be red.

The single comb should have 5 point – there is also a rose comb variety.

Large fowl should weigh around 10 pounds for the male and 8 pounds for the hens. Bantams weigh an astonishing 38 oz. male and 34 oz. female. In other words the bantam should portray the large fowl. The bantam Orpington is one of the largest bantams available – if you can find them!

The American Poultry Association admitted the Orpington colors to its standard as follows:

UK standards are evidently different and state that the body should be broad and deep, curvy with a shortish tail. The collection of feathers should be “close” – not “fluffy” like a Cochin or “tight” like a Game Fowl. 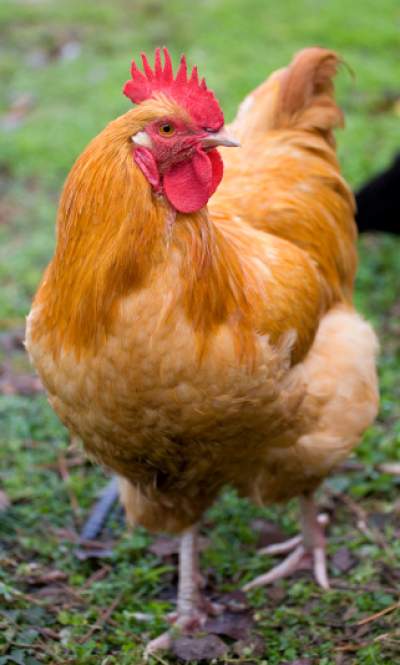 Buff Orrington rooster is docile and is very large for a chicken.

Normally, a rooster becomes aggressive by nature. This is almost true for all chicken breed. The Buff Oringtons are very docile roosters compared to other breeds. Most of them possess friendly personalities. And because of this a lot of them want to raise them as backyard flock.

Every Opringtons are said to be friendly and docile, but this especially true of the buff.

They are worthy of respect and calm – they sort of glide across the barnyard – unless they are running for treats, in which they increase their “skirts” ad run like hell!

They love to be cuddled and will seek human companion when they need it.

Their wonderful feathering makes them very cold hardy, although if their feathers get soaked they can chill and lose their life quickly. They do better at warmer climates but need to have access to shade during the heat of the day.

They make good and great mothers, they will often accept hatching eggs of other chickens placed under them. The buff roosters are said to be really protective of the chicks they hatch and will even take a spell  on the nest to give mom a break!

They are one of the most loved choices for many families because the buff is excellent with children, tolerating al sorts of silly things that kids do.

But, make sure to keep a watchful eye since they have a strong beak that can deliver a mighty peck if need be.

Being so friendly and laid back makes them a great project bird for yhe 4H club since they tolerate confinement and handling so well. These same qualities make for a great show bird also as they are not angered or shamed by constant handling, unusual noises, and strange environments.

They handle confinement well and although they will free range they hardly forage depending mostly on their feeders.

The Buff Orpington are reliable layers of large brown eggs around 200-280 per year. If your reason fro raising them is meat, they should be table ready at about 22 weeks. They are often thought og to be the perfect dual purpose chicken.

Is the Buff Orpington Right For You?

If you would like a big fluffy chicken that lays well, has a sweet disposition and does well with little children, this might be your best shot!

They are friendly, docile, and calm by nature. This makes them a family oriented flock. They interact well with people and I have never seen one exhibit a mean behavior.

Note: Because of their mean behavior, they should never be put together with a mean chicken breed such as the Rhode Rooster Island or Welsummers. They are most likely to be at the bottom of the pecking order.

If you are a city/town dweller, the buff is a really quiet bird, ideally suited for confinement in a small backyard. They are an awesome bird for beginners as they are very easy to handle and are fairly low maintenance.

The con to this chicken breed is their tendency towards broodiness. However, if you wish t raise your own chicks, then the buff is perfect for you! . They are great mothers as they care well for their chicks.

They do not tolerate hight temperatures well, so shade, ventilation and lots of space should be provided for these large birds. They shake off the cold when winter comes as they have extra fluffy feathers.

Their dense feathers means you must regularly check for mites and lice and treat accordingly. Lots of owners treat them with poultry dust regularly because it’s really hard to spot little creepy crawlies amongst all of those feathers.

Because they are large birds, they have the tendency to become lazy and a such should be allowed to exercise on a regular basis when needed.

They can prove to be heavy feeders with a tendency towards obesity – this needs to be monitored for the health of the bird.

The Orpington breed brought change to the world as a dual purpose chickens. Until they came along, the normal table hen was often fairly scrawny and was not the best egg laying birds.

Of all color varieties made available, the buff is the stand out favorite.

Maybe this is a s a result of their feather colors combined with a friendly and calm disposition. They aren’t noisy like some other breeds, nor are they pushy chickens.

Despite family feuds and controversy, the Orpington not only survived but succeeded in making a name for itself in the chicken industry.

Reduced numbers were stopped and made reversed by backyard chicken lovers such as you and . The breed now enjoys a revived popularity and has proven that heritage birds now have a place in everyone’s heart and home.

Do you own buff Orpington rooster or hen? We would like to hear your experiences with this gentle and friendly  breed in the comments section below…