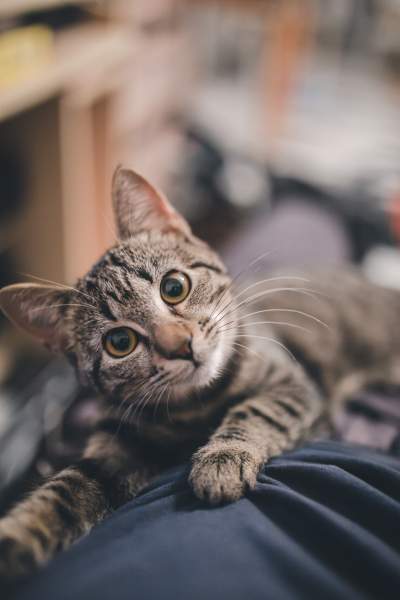 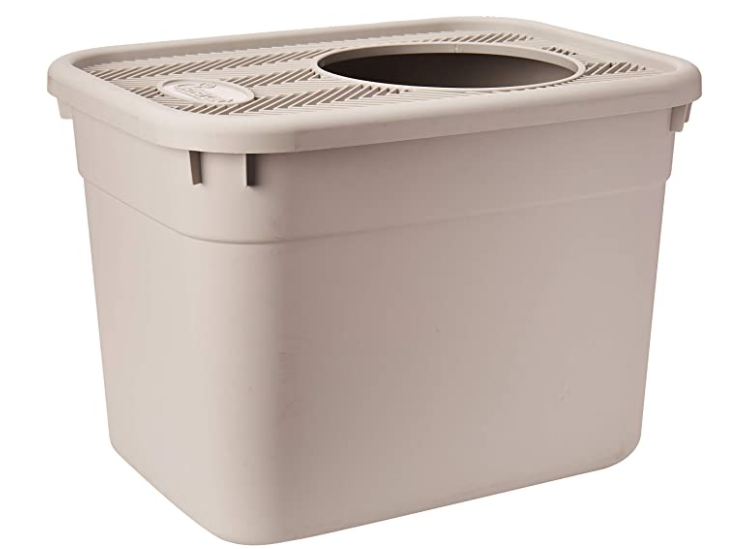 The CleverCat Top Entry Litter Box is, according to its manufacturer Clevercat, an award-winning letterbox that nearly eliminates tracking prevents over-the-edge spills and reduces odor.

I’ve tried several types of cat litter boxes, and this one has been the best by far. Nothing else seemed to keep litter off the floor, but this design has really cut down on the number of times we have to sweep around and underneath the box. We have 2 average-sized cats (9-12 lbs; names Stinky and Number 2) living with us in a very small apartment. I know that at least 2 cat litter boxes are recommended, but this is just not realistic in a place like ours.

Anyway, one cat (Stinky) apparently has NO scratch instinct and consistently drops his loads in the box and runs off without covering them up. The other cat (#2) is fastidious. After doing her business, she will tidily cover the offender within seconds, then continues to paw at the litter for about 5 minutes or until someone chases her out. She is also not content to scratch the litter but scratches the floor and walls around the box. With other boxes (including covered ones), we had to live with cleaning up litter around the box every day, and often she’d eject poop onto the floor (a real problem, and especially nasty when the projectile happened to be a non-litter-encrusted log from the non-scratching cat.

After trying all kinds of covers and mats, I finally decided to try the Clever cat. I cringed at spending $30 for what looked like a $5 rubber maid tub whose lid was corrugated and had a hole in it, and I doubted whether my idiosyncratic cats would accept this gadget as a toilet. They took a right to it, though, and I have been thoroughly impressed with the results. It is sort of infuriating that it costs so much for such a simple design, but personally, I’d rather pay for it than simply cutting a hole in the lid of a bargain tub, as another reviewer has suggested.

Living in a studio with two cats has not made me a Zen-like child of the Earth. Not only does my black tom nip me awake at 6AM just to stare at me, but my tabby also unloads some of the most unholy waste in this hemisphere. Why?

He doesn’t bury his crap.

Whatever feline instinct is supposed to trigger that dig-and-cover behaviour was apparently eradicated from his simian-faced gene pool. Every time he hops in the box, he kicks about a pound of sand onto the floor, drops his load, and then sprints around the apartment like a PCP-fuelled dervish.

While Clever cat hasn’t improved his manners in the slightest, it is the ONLY litter box I’ve found that will contain his sand-flinging episodes effectively. Even better: the little grooves on the top of the box mean that most of the excess litter gets trapped up top. Which means less bacteria-laden grit clinging to my toes.

Five stars for ZERO learning curve, sand that stays in the cat litter box, and depth enough to provide a satisfying amount of grit for my kitties to befoul.

I’ve been through MANY litter boxes, and this one is just great. My cats got used to it very quickly, and it has really reduced the amount of litter I have to sweep up. I also no longer have to clean up after one cat that doesn’t have great aim (she always aims high, so there would be urine between the box and the lid of my old litter boxes).

I’ve never really done the liner thing because they are so expensive, but I read on another site that you can use 30-gallon trash bags instead of buying the liners. I tried it out, and they fit and work perfectly (I’ve been using outdoor bags since they are thicker than kitchen bags). I highly recommend this box! Clever Cat Litter Box Review Verdict