You are here: Home / Other Pets / Gapeworm Symptoms in Chickens (and How to Treat)

Gapeworm symptoms in chickens include gasping and coughing…

However, this does not always mean that your bird is infected.

Your chickens might also be making funny rasping noises, gasping for breath, and shaking their head.

Gapeworm is very common in pheasants but also turkey, chickens, and guinea fowl. Gapeworms can cause huge damage to both turkeys and pheasants.

As earlier stated, Gaping “Gasping for breath” remains the biggest sign of gapeworm. Neck stretching and shaking of the head are also common signs.

To confirm, hold your birds gurgling can be heard, which is “tracheal rattle”. Most times, gasping for breath is often mistaken for a respiratory problem. If a heavy infestation occurs, death by suffocation will occur.

Gapeworm infestation can occur indirectly by intermediate hosts such as snails or earthworms or directly eating eggs that have been coughed up or swallowed by infected birds.

The symptoms of the Syngamus trachea are coined from its Latin name (trachea=throat) and its common name, gapeworm. The first sign is a bird that is gaping (breathing with its mouth), usually with its neck extended upward as it gasps for breath, often making a hissing sound due to the parasite.

When badly affected, young birds conditions worsen quickly, and they will die. Adult birds tend to show lesser signs that are obvious, and some may show no signs at all.

They are dangerous to young birds, so rotation of pens is important. Better yet, if you can, quarantine all young birds from adults as a good preventative measure. Control of fly (slug and fly populations) and rotatory hoeing of soil can also prevent reinfection.

Now that you know gapeworm symptoms in chickens let’s move on to treatment and history. 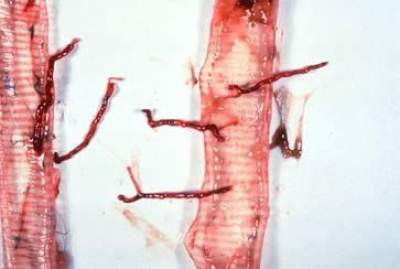 Natural Treatment for Gapeworm in Chickens | Treating Birds With Worms

Getting your bird medicated water is fine, but making them drink it is another problem.

To cure, kindly use a recommended Flubenvet 1% 60g which is licensed for treating gapeworm. For heavy infestations ( ‘eggs per gram of faeces’ or “high epg” determined by laboratory worm count), usually on high stocking density or heavily used ground, it is usually necessary to worm again a little before the prepatent period (the time it takes from being laid as a worm egg to being a mature worm of egg-laying age) to reduce high infection levels. Rotating the pasture helps to break this cycle.

You can also use a dilution of Aviverm for large birds (between the range of $17-$18 for a 50ml bottle; this is due to change later) diluted in your bird’s drinking water. Weigh your bird using a scale, then work out a dose and add it to drinking water.

In chicken farming or backyard chickens keeping, its important you use Flubenol or Aviverm as they contain the levamisole (a chemical), which, when consumed, will kill adult worms. Ivermectin-based products will not kill adult gapeworms.

Note: Treat all of your birds, not just a particular one showing symptoms. If your chicken is not drinking water with the Aviverm or Flubenvet in it, you can mix some of the dirty water with wet kitten food, which they will eat. Aviverm can be used in a second dose 24 hours later in a serious case.

A few weeks after, your birds looking weak, zombielike and gapped a lot will begin doing better, will be back to their former happy state (free from gasping) and will be happy to gobble down their feed in a matter of minutes.

History of these Worms in Windpipe

Young birds up to 8 weeks of age have a higher chance of contacting gapeworms.

Gapeworms normally live in the windpipe (trachea) but are also found in the lung and bronchi.

The eggs picked up directly or indirectly hatch into a larva that then penetrates the intestine walls and moves to the bronchi and lungs.

Once there, they go through a Laval moult before travelling up to the trachea. Females and males gapeworms attach once they arrive there.

This process takes about seven days to complete. Fully grown, they are “ Y-Shaped and differ in size between 1 and 2cm. Their blood colour is “red”, or what I love to call “blood-red.”

Gapeworms lay eggs that get swallowed and passed out in the faeces or coughed up on the ground.

“It’s a parasite that lives in the flesh of the bird’s throat and causes consistent gasping and wheezing.”

Many people who want a natural treatment for gapeworm in chickens often make the mistake of giving the birds antibiotic (because they mistake it for a respiratory infection). This will not help if the bird is truly infected with gapeworm, and the condition will only worsen.

Remember, M and F gapeworm spend their entire lives joined to one another, embedded in your bird throat. They feed off your bird, creating eggs that pass through the bird or are coughed out so the next generation can be eaten by snails, earthworms, slugs, and flies.

Gapeworms become most deadly when they completely block the throat of an affected bird, stopping water, feed, and eventually air from passing through and eventually leading to death. Every type of poultry can be affected, including game birds and waterfowl, especially pheasants.

We hope your gapeworm symptoms in chickens helped you treat your chickens a whole lot better.