You are here: Home / Other Pets / Golden Comet Chickens: Everything You Need to Know [UPDATE: 2021]

Golden Comet Chickens are one of the newly created hybrid chickens that has been bred with the sole aim of maximizing egg production.

Initially, it was bred for commercial industry, but it has successfully found it way to backyards and small farms all around the globe and might just be the most widely kept hybrid hen.

Today’s article will show you the history, egg color, and personality  and discover more about this playful and productive little hen breed.

I can bet that you’d be “hen-mesmerized” after reading this article. You’d aslo be able to decide if this chicken breed is right for your flock or not.

The Golden Comet is a sex linked chicken.

So, what is a sex linked hen or rooster?

A sex link is not actually a “breed” in the real in the true sense of the word. It is an “hybrid” chicken or an hybrid chicken. It is important to remember this.

Now, if you mate a pure breed chicken with its’ own kind, the chicks produced from the mating will look the same as their parents.

On the other hand, A sex link chicken is a bird is easily sex-able at hatching; this means that it is easy to tell the females from males. This is an important trait for hatcheries based in the US, as it means that the hens can be kept for egg laying and the males are unfortunately disposed of (unless needed).

If you live in an area (like NYC) where roosters are not allowed, sex link chickens are your best bet of having all girls with no “cuckuroo” in the pack.

This chicken breed was created as a result of intentional mating between a New Hampshire rooster and a White Rock hen.

At times, some or all of these names are used interchangeably which often confuses people and each hatchery might have a different name for their “line” of sex link birds.

Commonly, the Golden Comet chickens are often medium/light reddish brown, and might possibly have small spots with white feathers. It really is a small bird for a standard chicken, with femailes weighing about 4lb and males weighing in at 6lb.

They have only one single upright comb- wattles and comb being red in color.

The body of the hen is an inverted triangular shape with a ‘U’ shape between the head and tail which is held quite high, almost perpendicular.

Because this bird is an hybrid, there is no set standard for it. 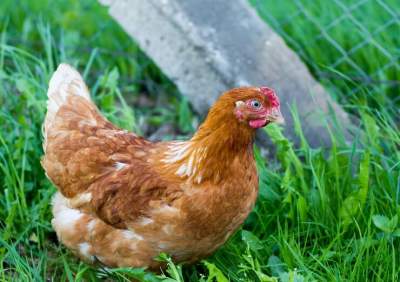 As early as 16 weeks, the Golden Comet can begin laying eggs. The eggs will be of course be smaller when they are pullets, but will become bigger as they grow.

A fireproof way of telling that a pullet is reaching maturity and ready to begin egg laying is when the waddle and pink comb become dark red. It happened real fast to a friend’s Cinnamon queen chicken pullet and a few days later, they began laying their eggs.

Golden Comets are great layers of medium to large brown eggs. Each week, they can lay between 5-6 eggs which puts them shoulder-to-shoulder with the Rose Island Red hen. They are able to churn out a big 330 eggs per year- that’s almost an egg on a daily basis.

From the moment the hens begin laying, they’d lay to around 2/3 year, after which egg production will drop slowly till it ceases. At that period, if you would love to continue receiving eggs on a frequent basis from the Golden Comet breed, you will need to introduce new pullets to the gang. The former hens will continue to lay but egg production will more than likely reduce significantly.

They will rarely go broody (not their fault as this has been bred out of them). So, if you would like to hatch some chicks, then you will have to use an incubator.

The “hybrid” part plays a role here. As you will not get Golden Comet chicks from Golden Comet hens, the offspring will be cross breeds.

This breed was intentionally bred to be an hen producing egg at an high rate. When you add a Golden Comet hen to your flock, you can expect her to lay an egg almost every day during her peak laying years.

The eggs of this chicken breed are brown shelled and extra-large or usually large in size. Their amazing egg laying ability has made them one of the breeds that produce the commercial brown eggs that supply grocery stores all across the county. Next to the Rhode Island Red chicken, the Golden Comet can definitely hold their own in egg production.

Regardless of your climate, this breed is good for you. They adapt well to cold climates as long as care is give n and you provide them with enough hay in the coop for insulation. Most times, they survive in the coldest of winters.

You might find your Golden Comet Chickens choosing to sleep in the straw or hay rather than perching on the roost in extremely cold temperatures to protect their legs and feet from frostbite.

You will need to manually check the comb of each chicken frequently when extreme cold hits your area to ensure none of your hens or roosters encounters frost bite. If the humidity level in the coop is too high, condensation can collect on the comb and freeze when the chicken goes outdoor or the temperature drops inside the coop.

Please Note: it is important to monitor humidity levels inside any chicken coop in extreme cold to avoid death or frost bite. 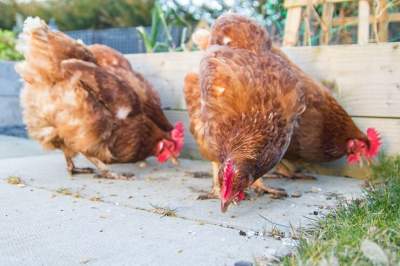 The Golden Comet chickens are said to be a curious and personal-able hen, is very calm and doesn’t mind being picked up by humans. In fact, some pet owners says this breed actually prefers to seek humans over its’ own flock mates.

They easily get acquainted to people and because of their friendly and gentle nature, they easily become family pets. They do not like pecking or squabbling generally and will stay away from the troublemaker if they can.

Thus, it is best tp keep them with breeds that are non-aggressive and calm as this will avoid them being picked on. Suitable breeds to mix with would be Plymouth Rocks, Faverolles, Cochins, or Orpingtons.

A Golden Comet should not face any real problems in her first 3 years other than common parasites like mites, worms, lice etc.

Because they were bred to maintain a high production rate, their lifespan is sadly short (commonly less than 4-5 years).

Like any other high production hens, they generally die of egg yolk peritonitis, reproductive tumors, or other reproductive hazards.

Is the Golden Comet Right For You?

If you want an high egg producing hen for your family, then Golden Comet Chickens are perfect for you.

Being a prolific layer; she lays early too. The con of this is that after three years, you will need to replace the flock with new girls if you want to maintain egg production.

The Comet is great with kids; they are gentle and enjoy people and aren’t easily “rattled” in most situations. They seem to handle most things thrown at them well.

The Cinnamon queen chicken is great foe chicken beginners as they are pretty low maintenance birds that are almost self-sufficient. They tolerate confinement well but are good foragers when allowed to.

Hybrid hens like the Golden Comet chickens are lovely birds for a small backyard as they take up almost no space, they aren’t really noisy and are eggs laying bazookas!

As you can think of, two or three years of constant egg laying does take its effect on their bodies and this is why they don’t live to old age.

In commercial setting, these hens would be slaughtered and replaced after two years maximum. Golden Comets are often the hens that folks receive when they rescue hens. 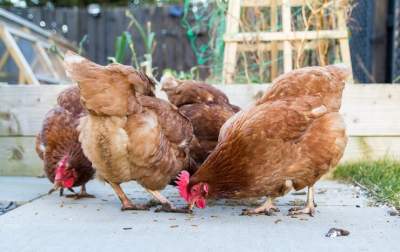 They do go on to lay eggs for another year or so usually, but not as fast and steady as before. Folks that have rescued them confirm that they are enjoyable and delightful birds to keep around in one’s yard.

Do you have any Golden Comet Chickens in your flock? Tell us your story using the comment button below…