You are here: Home / Other Pets / Opossum Tracks [How to Identify tracks in Mud, Dirt and Deep Snow]

Being able to identify Opossum tracks and tacking animals is one of the most interesting things that a person can learn. Tracking opossum can be one adventure that you can pout and when you know what the tracks looks like, you will be in a much better position to know whether the tracks left are actually made by an opossum or not. READ MORE: Opossum Tracks Voles vs Moles Do Mothballs Repel skunks Chicken Repiratory Infections Excessive Thirst in Cats Causes and Cure Opossums are marsupial i.e. they have a pouch just like the Kangaroo. Their tails are naked and the noses pointed. Their tails are able to take hold of and clasp objects; adapted for grasping especially wrapping around an object and this is what makes the animal to be such a good climber. They can store extra reserves of fat so as to survive when famine times present themselves. Their thumbs are actually opposable and they are located on the hind feet. This allows them to grip firmly unto branches. They are non-primates making them the only species of their kind to have the opposable thumbs. By nature, they are night creatures and the best time to see the tracks is in the early mornings. At this time, the trails prove to be fine and as you will notice, the dry soil actually ages so quickly especially at the riparian areas. They thrive in many different environments and the wilderness and cities are included. They are opportunistic feeders and therefore it is common for them to raid your home.

Opossum have been reported to migrate further north and we’re starting to see their tracks. Many people are not familiar with the opossum tracks. Today, we shall teach you how to identify People who live in Niagara Region in S. Ontario, would sight them come at night and eat the catfood They are very peaceful creatures (even though they look like insane giant rat getting electrocuted; haha). They also don’t seem to get into much trouble and are easier to have around than the raccoons. They also have the endearing habit of eating ticks. At first, their tracks might appear to be skunks or raccoon but careful examination with pictures below will tell that they are opossums. Coyote and dog tracks however are not particularly difficult to tell apart. 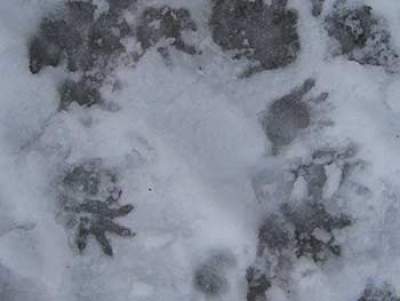 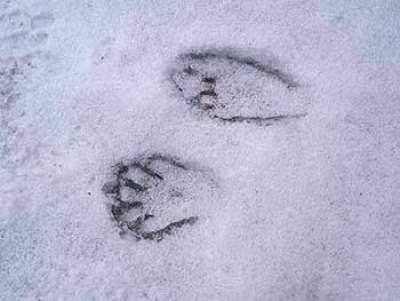 On the left, is opossum tracks on the right raccoon tracks, front and back paws. The opossum tracks also have a smaller front and a longer back track but the shape is very different with the toes clearly spread out. One clear sign you are dealing with opossum’s problem is the spread out toes, these often look like little starfish. Although they have nails, these don’t seem to show up much in the tracks, unlike a dog or a raccoon which have prominent nail marks.

The photos below shows that the opossum’s feet is clear with little pink toes widely spaced. 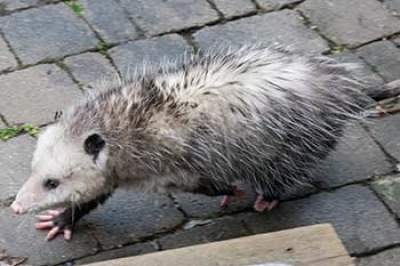 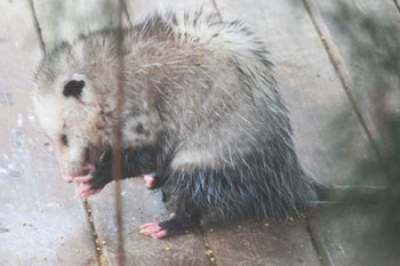 Opossum have a really distinct way of walking. They seem to waddle with their rumps going back and forth. The waddle is more pronounced in the larger older individuals. Another distinctive trait is that they can keep their tails up. This means that some tracks will have tail marks zig-zagging back and forth while others show no tail marks at all. 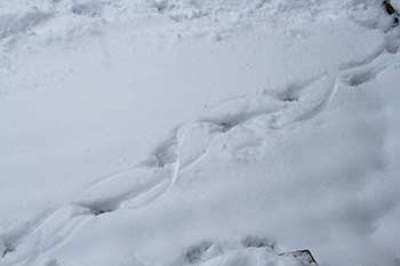 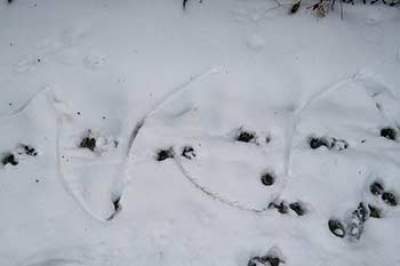 The tail tracks are easier to spot in deeper snow when it becomes more difficult to keep their tail out of the snow because of their short stubby legs. Like lots of other animals, opossum put their back feet in the tracks of their front feet or rather just behind, so it’s fairly normal to see a front paw print looking like a little star, just a bit covered by the back print which is just a bit longer. 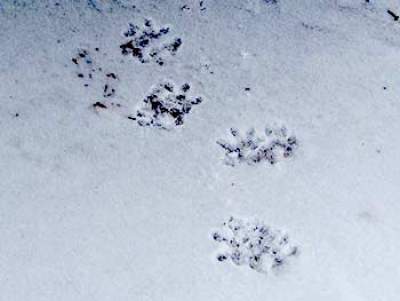 You can see opossum in worse weather than raccoons. They can handle cold and rain well. Plus, seem to not mind staying under colder rain or a colder weather than the way raccoons do, sleeping through bad weather. Maybe the opossums have not adapted to bad weather yet. You can sight them  an hour after sunset. They are the first to check out the fallen seed from the bird feeders and dig for the grubs and worms that seem to be more abundant around the fallen seed. I’ve only seen opossum droppings once. It was the size and shape of a small dog’s but was much coarser, full of ?? Undigested seeds and other vegetation. This sample was almost black. I think their poo would vary depending on what was on the menu that day. Opossum are fairly harmless and will play dead, I’ve seen one do this around my neighbors dog, rather than fight. Plus, they don’t carry rabies often, because their temperature is lower than ideal for the rabies virus. 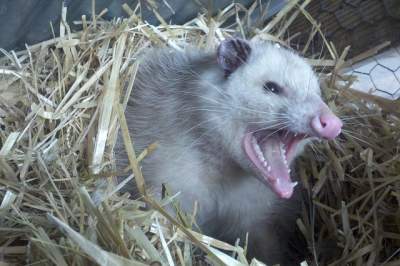 They look quite disreputable with a lot of sharp teeth but I’ve never seen them bite anything that did not attack them. I would much rather have opossums around than ticks

Raccoon paw prints looks like a small person’s hand, with claws at the end of each finger. They have 5 toes on both their front and back feet. They have long finger used in opening latches, turn doorknobs, untie knots and open jars Yes, opossums are proven to be dangerous because of the many diseases that they carry and can transmit (rabies being one of them). According to the CDC, opossums, while rare, do have the ability to carry some diseases. The American possums are actually known as opossums, scientific name, Didelphimorphia. But for some reason, they are more commonly referred to as possums, just like our native Australian species. But our Australian possums are (scientific name) Phalangeridae. Both are marsupials, but that’s about it. No, all thumbs. The opossum has opposable “thumbs.” The opossum’s “thumbs” (called halux) are on its rear feet (so, technically they’re toes), and abet the opossum’s formidable climbing skills. Opossums and primates are the only mammals with opposable first toes. Myths say they hang upside down by their tails while sleeping. This is untrue, as possums do not hang upside down when sleeping. If you have any in your yard, don’t worry. Far from being a threat/nuisance, they can help eat snails, insects slugs, and sometimes even small rodents. Plus, they will be moving on in a short while if you spot them. During winter they hardly share a nest with other opossums. They will spend the winter in dens like abandoned woodchuck burrows, hollow trees, brush piles and hollow trees. Opossums carry diseases such as leptospirosis, relapsing fever, tularemia, tuberculosis, spotted fever, trichomoniasis, toxoplasmosis, coccidiosis, and Chagas disease. They may also be infested with lice, fleas, mites, and ticks. Opossums are hosts for cat and dog fleas, especially in urban environments. Opossums have 13 nipples, arranged in a circle of 12 with one in the middle for their babies. Their coats are a dull grayish brown, other than on their faces, which are white. Opossums have long, hairless, prehensile tails, used to grab branches and carry small objects. Virginia opossum live for 4 years and common opossum live for 2 years The Virginia opossum lives in regions as far north as Canada and as far south as Central America, while other types of opossums only inhabit countries south of the United States. The Virginia opossum can often be found in wooded areas, though its habitat may vary widely. Opossums commonly live alone, having a home range of 10 to 50 acres (4 to 20 ha). Young ones appear to roam randomly until they find a suitable home range. Usually they are active only at night. Possums are highly territorial so relocating them elsewhere will only result in the released animal being attacked by possums already in the area. The possum relocated by you will have died under very stressful circumstances. So, yes, it will die!. Opossums are awake at night and sleep during the day. They spend nights searching for food. Though they don’t hibernate, opossums do slow down during the winter. They live in burrows that they fill with shredded paper or dry leaves, and fat reserves help keep them warm A possum will most likely faint or “play dead” at the prospect of a confrontation. This physiological response is automatic and involuntary. The shock and stress of the encounter actually triggers a comatose state that can last anywhere from 40 minutes to four hours. Then look at the size of the track Adult cougar tracks average 3 1/2″ tall by 4″ wide. In contrast, coyote (and most other dog tracks) are longer than they are wide. Bobcat tracks are much smaller than cougar tracks, typically about 1 1/2″ long by 1 3/8″ wide. The front paw prints are about 2 1/4” to 2 3/4” long, and about 1 3/4” to 2 3/8” wide. The footpads are smaller in the back prints. Check for claw marks. Coyote trackshave claws, but they don’t show if the ground is too hard. During the day, you can find the common brushtail possums  sleeping alone during the day in dens in tree hollows, rock piles or logs. Dens are often in limited supply in the bush and possums will compete for nesting sites, sometimes fighting to the death. Possums are nocturnal and come out of their dens about 30 minutes after sunset. The main feeding activity tends to occur about two hours after they have come out of the den. Heavy rain can at times delay possums from leaving their dens. Virginia opossum live for 4 years and the common US opossum live for 2 years Opossums are omnivorous and are beneficial to humans because they consume undesirable insects, snails, and slugs and cause very little damage. Opossums are usually  harmless and shy animals, with two main defense mechanisms. First, if an opossum is frightened and unable to flee, she may display her teeth and hiss. Second, play dead. No!  but Possums may not kill chickens but they eat chicken eggs. If birds are dead but not eaten and have parts still intact, a weasel may have attacked the flock. Members of the weasel family, including mink, kill just for the fun of killing. Often, the chickens‘ bodies are bloodied. Do not try to give them ANY type of milk or formula. If the baby opossums still have their eyes closed, they will need to be stimulated to defecate and urinate. After hydrating, gently wipe their genital area with a cotton ball, slightly moistened with warm water. Now that you can identify opossum tracks, share this with family and friends.
ShareTweetGoogleWhatsappPinterestDiggLinkedinRedditStumbleuponTelegramFlipboard