The ScoopFree Self-Cleaning Litter Box is something for people who don’t want to see, touch or smell their cat’s waste. Not all cat lovers want the full cat experience, which requires them to deal with waste management. Luckily for them, you can get the full experience while only touching the litter box a few times a week.

There are automatic self-cleaning litter boxes that practically do the job for you. The ScoopFree Self-Cleaning Litter Box belongs to this category of handy devices. In this ScoopFree Litter Box review, we’ll have a look at what this litter box does and why you should or shouldn’t buy it. 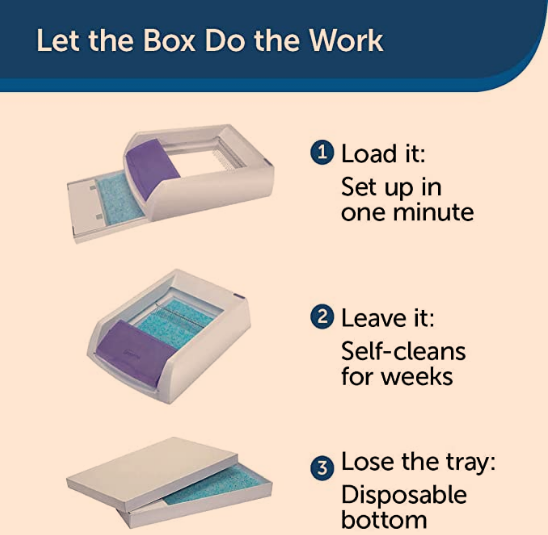 Load ScoopFree with the disposable litter tray prefilled with Premium Blue Crystals. When your cat uses the litter box, the crystals immediately absorb moisture and odor and begin to dehydrate solids.

Twenty minutes later, ScoopFree’s rake automatically sweeps the waste into a covered compartment, leaving the litter smelling clean and fresh. Replace the disposable tray every few weeks, and the litter box is just like new.

Most people use The Forever Litter Tray, a hard plastic tray, with this self-cleaning litter box so that they don’t need to buy disposable trays.

The ScoopFree Self-Cleaning Litter Box is so reliable it comes with a 90-day money-back guarantee.

My cat is a 13 pounder, poops about five times a day, and boy does it stink! I feel that cleaning a cat box several times a day is a real pain, but cleaning it up off the basement rug every day. If I don’t clean the box soon enough for “his highness”!

This thing is GREAT! Ok, I’ve only had it for five days now, and it specifically says on the box that for larger cats or multiple cats, the cartridge will NOT last 30 days. The container is full (as I said, he poops A LOT)

But I don’t mind taking the scoop and scooping out the container once a week. I have to do this because replacement cartridges are $15 or so (that’s the really bad part). I still have to see if it will take all his urine for 30 days, but in the meantime: the smell is gone.

He doesn’t track litter everywhere (I used clumping before, and he left a real mess, along with the smell); just a few of the crystals get on the floor. I don’t have to clean the box daily (and the basement carpet), and it works.

One thing to note, I did not realize how BIG the thing is, and I also didn’t think about plugging it in, so you may have to revise where you put it. Also, it’s not perfect: some of the poop got behind the rake and got stuck, but whoopie, no big deal to take a piece of toilet paper and pull it off. I may look into reusing cartridges (waxed cardboard boxes with scoop free crystals dumped into them) and adding crystals from a bottle, but that may not be possible. Waxed cardboard can only take so much wetness, but that may be an option. I think a bottle of the stuff is around $15 too, but you may get 2 or 3 uses out of it, rather than just the one.

We were thrilled at first, and cats took to it despite the cleaning noise we thought would scare them. But the cost of getting the litter replaced is extremely high. And the poop itself has to be cleaned off the rake.

We have three cats, so it was too much to ask for it to last a week or two, more like three to five days. I ended up tossing this and going back to the old fashioned litter box.

I bought this as a replacement for my first automated litter box, the Petmate Purrformat Plus XL. That one was awful, but this one is great.

The rake on this litter box switches the direction it points as it moves to the front and back to the box’s rear. The net effect is that, unlike the Petmate, you don’t get a wall of litter at the rear of the box. The litter is evenly distributed along the bottom every time, and the rake can return to its starting point every time, unlike the Petmate.

Furthermore, this one is much quieter than the Petmate. The Petmate sounded like a remote-controlled tank, but this one has a gentle hum to it, and it completes the task of sweeping in about 1/2 to 1/3 the time the Petmate takes, too.

My 2 1/2-month-old kitten took to it like a duck to water. She kind of thinks it’s a toy right now, but she also knows what it’s there for.

My biggest concern is with the oder of the litter box. I have tried different litter boxes and litter brands. I am a first-time cat owner, and the smell of the litter box was gross. I was to the point of getting new homes for my new kittens.

However, with the scoop free litter box, there is no oder, and it is designed so that most of the crystals stay in the box. I also purchased the privacy hood, which also contains the oder and my kitties like their privacy. So I am keeping the kitties.

Why you’d buy it: people love the ScoopFree Self-Cleaning Litter Box because of its ability to moisture and odor. With this litter box, you will never smell anything bad again.

Why you wouldn’t buy it: although the litter box itself isn’t very expensive, you will need to buy The Forever Litter Tray or ScoopFree Litter Refills. Although the manufacturer claims that you don’t need to touch, clean or fill the litter box for up to 30 days, some people report that the cartridge doesn’t last for 30 days.