Giving your ferret-friend a home in the Prevue hendryx ferret cage is one of the best decisions you’ll ever make.

It’s saddening when you go to a pet store and you discover that many pet shops put them in a cage that isn’t much larger than they are.

For practical reasons, owners should look for the biggest cage possible for ferrets. Since ferrets like to climb and jump, the taller the cage, the better.

Spacious cage provides room for even the most energetic ferret 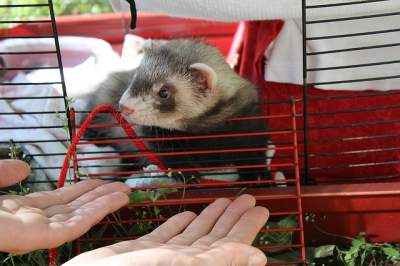 With a few exceptions, the Prevue Hendryx Black Feisty Ferret Cage fits many of these criterion. At 54″ tall with the stand, the cage is a great height for both the animal and the owner.

While the cage is originally designed for ferrets, chinchillas will be comfortable in it with a couple of modifications. It is made with powder coated steel mesh for rust proofing and good durability.

A tray underneath the cage holds accessories for the pet.

The bars are 7/8″ wide and should be secure for all but baby chinchillas. This tow level cage has a door for each level that opens half of the width of the front.

The Ferret Nation cage that the Hendryx cage competes with opens the full width of the front. We would have loved them to add the same functionality so perhaps if Prevue makes a follow up design, they will allow full width doors.

The cage features two ledges with ramps as well as a ramp from the first to second floor with an opening to the second floor.

To shut access to the second floor, a trap door is included. The ramps and ledges are plastic which is dine for ferrets but not rats and chinchillas that will chew them.

The floor bottoms are wire grate which also isn’t the most comfortable for chinchilla feet. They have a 1/2″ rectangular opening and chinchillas could get stuck on them.

Noise is one big aspect rat owners are concerned with small animal cages. When they run on their wheel, chinchillas, rats, and other small animals can make quite a racket.

For the most part, the Prevue Hendryx ferret cage is quiet except one part, which is the door latch. It is loose enough that the metal rattles when the cage shakes.

Personally speaking, the latch is not as good of a design as a Ferret Nation or Critter Nation’s locking mechanism because the latch bar just hangs in the holder.

Your pet won’t be able to open the door, but it feels cheap.

We understand that this is primarily made for ferrets but with a few modifications, you can make it more suited for chinchilla or rat.

Starting with the wire bottom, you can line it with fleece to prevent feet from being stuck. Plus, if the floors are fleece lined, chinchilla poop won’t fall through to the pan.

The ledges and ramps can also be lined with fleece to minimize plastic chewing. In fact, those who have a handy person in the house or who are handy can build wood ledges and ramps and not use the included ones.

Just use kiln dried pine because many other woods are not suited for a chinchilla.

Chinchilla owners with tall cages have experienced and understand the problem of poop and possibly urine flying out from the side of the cage.

A good modification is to add cage guards to prevent this. Bass equipment makes such products for the Ferret Nation cages and a custom one for the Hendryx cage might be able to be made by request. However, a wood cage guard can be made without much effort if the pine boards can be cut in the right dimensions.

Good accessories for the cage are wood ledges that can be bought online or made. Plus, the Chin Spin wheel will fit on the first or second floor and can be attached to the side wall.

Because the bar spacing isn’t as compact as a Quality Cage Mansion bar, it might not be as durable but we don’t want to make a definitive claim until we have had it for years.

Generally speaking, the PH ferret cage works well with ferrets and can work with rats and chinchillas with a few modifications, mainly the ramps and flooring.

It is quite larger than a lot of pet store cages and is well built.

The Hendryx cage competes with the Ferret Nation and Quality Cage Mansion, and while those are overall better cages, the Hendryx cage is much less expensive.

Medications here and there to make it chinchilla proof will likely be less costly than the others. If you are willing to work on it, the Prevue Hendryx is a great cage. And if you have a ferret, you might be able to use it as designed.

We hope our review of the Prevue hendryx ferret cage is worth your time. Ensure to subscribe for more updates.

Best Egg Incubators for the Money