You are here: Home / Other Pets / Rhode Island Red Chicken [Eggs,Temperament, and more]

Globally, the Rhode Island Red Chicken is one of the most successful breeds of chicken in the whole world.

It has made fame for itself right from its homeland to the farthest corner of the earth and is thriving even in the face of modern industrial hens and intensive farming practices.

Why the RI is breeds so famous?

One thing is evident; they do not require much care and are extremely healthy.

Personally, I have never come across a Rhode Island hen that I don’t like!

It goes way back to 1854. A sea captain with the name of William Tripp purchased a Malay rooster from a fellow rooster. He took the rooster home and mated it with his chickens. Tripp noticed that the offspring of this crossing lay more eggs.

He requested for help from his friend John Macomber and the due began cross breeding quickly. At this point the resulting birds were either called a “Macomber” or “Tripp’s Fowl” and were known to be superior to already existing fowl in the area.

Many other breeds were used to refine and improve the desired hen- these breeds included the Light Brahma, Brown Leghorns, the Malay, Chinese Cochin, Java, and Plymouth Rocks.

Soon as these began, these birds grabbed the attention of Isaac Wilbour, an already successful poultry man. He bought some of these birds and began his personal selection program. Despite all the work and effort Macomber and Tripp put into this breed, Wilbour is credited with naming the Rhose Island Red.

The Rhode Island Red was developed first as a dual purpose bird by poultry farmers of the New England area and not “bird fenciers”, so the defining qualities were utilitarian not “good looks”

The Rhode Island Red chicken is the State of Rhode Island- it was elected to this honoured place in 1954. 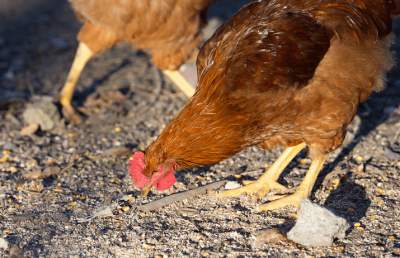 The American Poultry Association in 1904 accepted the Rhode Island Red Chicken. The rose-combed variety was accepted in 1906. They are considered to be ‘American class – large fowl, clean legged’.

In 1909, It was accepted to the British Poultry Standard.

The whole picture of the body should look like a longish “brick”- solid and rectangular!

Feathers are expected to be ‘hard’ – this they inherited from their Java and Malay genes. The preferred color of ‘perfection’ has varied over the years from a rich mahogany to a dark rust color.

Some black feathers in the tail and wings is perfectly normal but is considered ‘smuttiness’ by judges of the APA standard.

The wattles, comb and ear lobes should be red. Eyes are orange/red in color too.

The Rhode Island has a yellow skin- the yellow color can also be seen in the legs and feet. Each foot should have their beak and toes yellowish/horn colored.

The comb is often upright, but rose combed Rhode Islands actually exist although your chances of having them are next to none.

Bantam Rhode Islands Chicken exists too but there are even rarer at the current time.

A large male rooster weighs approximately 8.5 lb with the hen reaching 6.5 lb. The rose comb variety often weighs less than the single comb. Bantam weight for a rooster. Bantam weights for a rooster is 2.1 lb and a hen at 1.9 lb.

The Rhode Island Red is an excellent egg laying bird- is is difficult to beat them in output and continuity.

The original flocks of Rhode Islands were bred to lay eggs and give meat at the same time. However, following the war in 1850s’, the breed was again refined to lay more eggs.

These eggs are medium to large and light brown in color. Rhode Island red egg production will increase in size over the years, like any other hens of other varieties.

The “heritage” type hen does not lag behind in the number of egg laying but the major difference is table quality, texture, and the taste of the meat.

These chickens can be anything from docile to aggressive and pushy! Personally, I have experience them in these forms: friendly, curious, exuberant, and a bit pushy but still lovable- but never quiet!

They are often somewhere in the middle of the pecking order.

They forage actively, scavenging for seeds and bugs are are not adverse to the occasional frog or mouse that happens to wander in their direction. They do well in confinement, but love nothinh better than investigating the yard for tasty treats in hiding.

The hens are generally laid back and calm enjoying the company of chickens and humans alike. The rooster on the other hand can be territorial and aggressive, so care should be taken to select the least aggressive of the bunch.

Now, the roosters should never be allowed around children if they exhibit aggression issue.

The Rhode Island Red hen is said to be not broody. When they do turn broody, they take the business of sitting on their nest honestly and make good mothers. 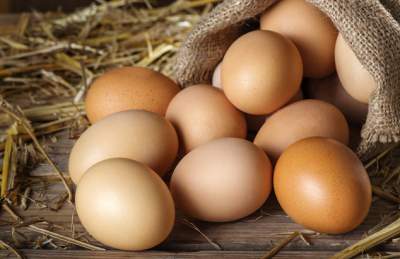 As a dual purpose Hen, it lays for approximately 3 years. After which they can be used as pets with lifespan up to 10-14 years or used for meat.

They are a hardy breed, and are quite easy to raise. At peak production, the hens are egg-laying machines. 1 hen can give you 5-6 eggs a week.

The younger any chicken is, the harder it is to spot the difference.

Generally, the males tend to be more “showy”, have strange attributes and show more colors. They also show off to impress their lady-companions as they protect them.

Only the strong cocks get the chicks and make babies with them. The males have bigger combs, longer tail feathers, and develop spurs next to the big toe on their feet.

Oh….and by the way…..they start mating the hens and they start crowing – a dead giveaway 🙂

Now, the hens have smaller combs and have less coloration.

Other Important points to remember:

When Do Rhode Island Red Roosters Start To Crow?

At 4-5 months, the roosters in your groupie begin to crow and that may be the time you’d discover your most loved hen is actually a “he”. A juvenile rooster is often bigger than his sisters. At times, it is easier to detect a rooster before he begins to crow.

How to Stop a Rooster from Crowing

Rhode Island Reds are famous for their relatively hardy nature. Their well rich constitution comes from the Malay side of the family which gives them an A+ when it comes to health.

Like with every bird, ectoparasites and mites can be a problem. This can be controlled by dust bathes, appropriate dusting and careful checking.

Aside this, they are usually an active and healthy breed.

Is The Rhode Island Red Right For You?

Rhode Island Red Chicken is good for you if you…….

If you like a first class hen loaded with multiple personalities- search no more! These pretty brown/red hens just brim with their own personal enthusiasm and personalities.

The Rhode Island Red is no luxurious type of chicken. They can thrive well on sub-standard feed, although of course it is not recommended to feed them little.

The same can be said for its housing. While other breeds will just “survive in a difficult or unpleasant situation the Rhode Island seems to thrive on it!

They are easy going and are very tolerant. They enjoy company and will often follow you around in exchange for “freebies”

They do well with children and are family oriented (but watch out for the roosters around little kids). A small number of these hens in your backyard will definitely lay you and your family a good amount of eggs.

Ever wonder why people say that: if you are undecided what type of chicken will suit you best – You should get a Rhode Island Red. You can’t go wrong and there is more than a grain of truth to this saying!

No matter where you live, from Australia to Canada, these robust birds will handle almost any climate with ease. They do not seem to be really bothered by heat or cold, but of course you will need to provide a suitable accommodation and care for them to thrive best.

Rhode Island Reds have definitely left their imprint in the hearts of chicken lovers and in the poultry world. What began as a “backyard project” has become a renowned pillar of the egg laying industry.

The “modern industrial” Rhode Island Red is a great laying bird that provides eggs consistently and has a bag full of personality.

Sadly, the Rhode Island Red ‘heritage’ side of the breed is making less progress and is considered  in the American Livestock Breed Conservancy list as ‘watch’. This means that there are less than 2,500 registered birds in the USA and less than 10,000 worldwide.

I have Rhode Island hens in my little backyard but might laughter them soon. However, they are cute and are a burst of characters. I find them to calm, friendly and non-aggressive to other hens or cocks, even the hellish ones.

Always curious, they will come lap their wings to the gate to check if there is anything for them to snack on! Plus, they are always happy to see you and will have interesting “conversations with you.”

At the end of the growing season I allow them into my mom’s garden as they do an excellent job at catching bugs, turning the earth over and eating seeds. What other breed do you think can eat this breed?

Do you keep Rhode Island Red chicken? Share with us your experience with keeping them in the comments section below…