The Swedish Flower hen does not only have a beautiful name, the Skånsk Blommehöna is a marvellous bird.

The name meaning ‘Skane Bloom-hen’; fits it well since the feathers remind you of flowers.

It was not so popular outside its native area of Sweden until 2010 when a mall number were imported to the US.

Swedish Flower Hens were first introduced to the US in 2010. These beauties are known for their white tipped feathers and are mainly eggs laying bird. There are three base colors: splash, black base, and blue base.

History and Background of the Swedish Flower Hen

The Swedish Flower hen has the features of being a landrace chicken. Landrace are birds that were not “created or modified by mankind” but rather adapted naturally to the environment in which they lived. There is no place for the weak, only the strong survived,

They went through evolution to become very adept at survival in the sometimes difficult climate of southern Sweden and became the traditional farm hen of that region.

The origins can only be guessed. It is possible that the seafarers’ and settlers used it from food source and brought chickens to remote settlements to trade for other things.

They would have contributed meat and eggs to the farmers and the feathers were used to fill comforters, it’s most likely they fend for themselves and were not cared for as livestock. They did a fine job at that (seeing the breed thrives today).

Like lots of older breeds, the arrival of the industrial hen almost sent this lovely, hardy bird to extinction.

By the 1970s’ only a few were left in Sweden. A small number of isolated flocks were found and a restoration and breeding plan was put into place by the Swedish Genetic Project.

The primary aim of the Project is to create awareness and number of this endangered species and to keep their status as heritage hen.

Swedish flower hens are the largest breed of chickens with roots in Sweden. Rooster can pack weight up to 8 lbs.

The  commercialization of Sweden’s poultry flocks in the half of the 20th century almost sent this breed off the face of the earth.

A few decades ago, remnants flocks were identified in 3 small, rural Swedish villages and a combined effort was made to save the breed.

By the late 1980s, less than 500 birds actually existed in the world. Today, about a thousand Swedish Flower hens live in about fifty scattered flocks, and until Greenfire Farms began working with this breed, a tiny fraction could only be found outside remote villages in Sweden.

Swedish flower hens are called blommeh??ns in Swedish; literally ‘bloom hens.’ The brilliant and complex color feather patterns of the birds do, indeed, portray the image of a tangle of wildflowers. Their complete visual appeal can’t be fully appreciated unless you witness firsthand the rich and striking colors of the birds.

A genetic mutation created a variation of the red that is a sub color (which may appear in any of the bases). It is known as the Snow Leopard color in the USA.

The original flocks were found in three areas:

As you may infer from the fact that there are crested and non-crested birds, the appearance of the hen can vary tremendously from one bird to the next.

In fact, several people who keep them enjoy the diversity of the breed – a mixed assortment if you will.

The base colors can range from black, blue, yellow and reds. The feather pattern is mille fleur (thousand flowers), the feathers are white tipped. The combinations are many and varied – black/white; white/red and a pattern similar to the Speckled Sussex hen.

The rarest coloration pattern is called ‘Snow Leopard’. Some of the white tips are replaced by black tips giving an overall picture of gold/white/black markings named after the rare Snow Leopard.

I find that words are inadequate to describe the sheer variety of colors as seen in this particular breed.

Birds can be crested, tasseled or not, depending on the line of birds you have.

Wattles, single comb and ear lobes are all red, eyes are orange/yellow in color.

The body is described as round and robust, a medium sized bird with the roosters weighing around 8lb, and the hens 5 ½ lb.

The skin can be yellow or black mottled in color, with legs being clean and light tan in color. Chicks’ legs can be a pink or grey color.

The Swedish Flower hen has never been bred to any written “standard” so there is no standard for this chicken as yet.

There are lots of breeders working towards a standard variety, but you have to wonder what that will be and how it will affect the present diversity of coloration.

The Swedish Flower hen is agreed to be a calm, poised, and confident bird. It does well on its own when searching for food and is friendly towards the flock owner or keeper especially if treats are forthcoming.

The Roosters are said to be non-aggressive although they can crow quite loudly, so living with neighbors can be hell.

The Swedish Leopard hen is said to be a hardy bird when it comes to facing temperatures. Its’ homeland temperatures range from just under 32°F to around 70°F.

The Swedish Flower hen loves likes to eat bugs in the free range market, is predator conscious and enjoys its independence, although they do well with confinement. They are curious surroundings and enjoy trying out new things.

They are also described very smart birds and quick learners.

These hens will lay in bunch of 150-200 eggs per year. Eggs start small, but soon become large to extra-large in size. The egg color is a light beige tint.

The Swedish flower hen my pet chicken makes great mothers when allowed to be broody, but are not known to broody excessively. About 1/3 hens will go broody if allowed.

In fact, the lack of interest in becoming broody might actually be one of the reasons why their numbers growths have not been impressive.

Chicks are kind of quick to mature and the chicken itself is a long lived bird, 10 years old rarely happens.

The hens are prolific layers for the most part of the year, and they far out-produce other breeds like Orpingtons.

The first “pullet eggs” produced by a young Swedish flower hen can be quite small in size. Be patient: Within a couple of months the hens will be generating extra-large eggs that are perfect for the table. 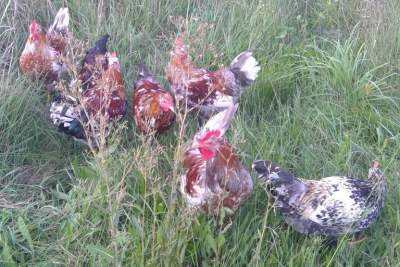 On an average, at 20 weeks. So if yours start laying eggs, it is most likely a hen. SPO start watching the coop for hidden eggs, checking out the next box, etc.

Other might begin to lay from 24 weeks and above.

Either your hen lays early or late, egg production occurs within the first year. It gets better in the second year but then begins to fall lower after then.

Is The Swedish Flower Hen Right For You?

The Swedish Flower chicken is really a pretty bird to look at and comes in various versions of colors.

The hens produce a fair amount of eggs per week. As a dual purpose hen the bird will dress out to a respectable weight. They are non-aggressive breed, social and are quite social, so your children can handle them.

Because they are not a recognized breed, exhibition would be mainly for the purpose of breed recognition at this time.

First time farmers or young ones can use the bird to gather experience. This is because they are more or less problem free and can function well on their own if the keeper allow.

Plus, they are super healthy. No common health or disease problems have been discovered in this breed. As always, be on the watch for ecto-parasites.

Let’s also talk about its cousin “The Swedish Emerald Hen”

The Swedish Black Hen (also known as Svart Hona) has the same fibromelantistic trait that most coveted chicken breed from Indonesia, the Ayam Cemani. This means that both inside and outside features of the Swedish Black Hen is the deepest black color you can think of.

Some folks claim to note the differences between the Ayam Cemani and the Swedish Black Hens. For example, the Ayam Cemani has been pointed to look more gamefowl in terms of body type- but the external differences are almost non-existent and if they exist can only be discovered by a highly r=trained eye. 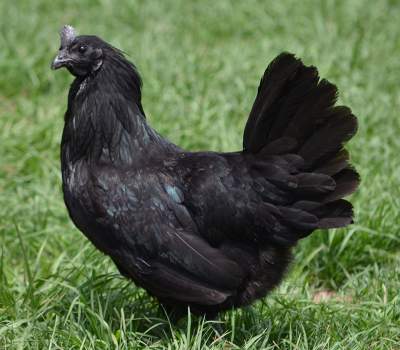 The gene responsible for fibromelanosis is a mutation that existed in Asia more than 800 years ago. The gene promotes the proliferation of black pigment cells.

This same mutation may have found its way into chickens transported to Norway as long as 400 years ago (Norway and neighboring Sweden have a complex and often bloody history, but suffice to say that for a period of time Norway was a state within Sweden until Norway won independence in 1905.)

Landrace chickens of exotic black birds boomed on what is now the Swedish-Norway border, and what had probably begun as a tropical transplant to this very cold region eventually adapted to the colder climate.

Some sources say that Swedish Black Hens made their way to the Nordic countries from seamen who traveled from Mozambique in the 1900s, although explanations differ and often vague.

One thing is sure– the Swedish Black Hens are relatively sleek and small- the roosters weigh about 4 lbs- and have a surprisingly friendly, related temperament.

The hens lay cream or white-colored eggs. Generally, the birds are almost completely covered in black although some have deep mulberry red facial skin.

Feathers can shimmer with iridescent purples and greens. These birds are able foragers and reflect the mastery that comes from the hundreds of years of free-range living enjoyed by their ancestors. A Swedish poultry keeper told us that Black Hens are known for not suffering from frostbite on their combs…. Isn’t that awesome?

A friend Swedish Black Hens have roosted in the open on windy nights as cold as 20°F without any bad effects. This particular landrace is hardy and easy to raise despite its rarity.

Swedish Flower Hens are famous right now thanks to a good number of enterprising hatcheries who are trying to get the breed accepted as a suitable backyard hen.

Prices can be quoted quite high for this breed, and can be from anywhere between $10.00 to $30.00. Like all things- buyer must beware of cheap deals.

They can handle independence well, although some people say that they seek out human company and are damn friendly to their keepers.

I wouldn’t mind keeping the Swedish Emerald hen at my backyard all day long. This bird might be added to my “must-haves” for next year. I believe it will be very cool to own!

Do you own any Swedish Flower Hen? If yes, share your experience with owning them in the comments section below…