The white Leghorn hen and rooster are a type of Leghorn chicken breed.

As kids, we watched Foghorn Leghorn (a cartoon rooster) who shows up frequently at the Looney Tunes on TV.

He is most likely one of the most popular Leghorn chicken in the world!

Initially, these beautiful birds were formerly called Italians, but it was changed over the years to Leghorns.

Today, we shall explain the Leghorn’s history, characteristics, egg production abilities, recognized variety, and if it is the best match for your flock.

So, read on to learn more about this pretty bird who lays numerous eggs.

The exact origin of the Leghorn remains a mystery. There exist lots of small breeds of land race chickens in the Tuscany region of Italy and from these came the Leghorn.

The name “Leghorn” came to be as a result of the word “Livorno” being more English. Livorno is the port city in Italy from which the Leghorns were first exported to the United States of America in the year 1828 or so. The events that the early birds faced are still unknown.

A Captain Gates of the US brought Leghorns to the USA. He docked at Mystic Harbor, Connecticut and these birds were the ancestors of the Leghorns we now know today.

The breed went through a series of refinement (which included breeding for a rose comb) in the US, the white Leghorn won the New York show in 1868 and the Leghorns were finally shipped around 180 to the UK.

The English people did not like the Leghorn small body and so crossed it with the Minorca to give it a more robust frame- like a dual purpose breed. However, the Leghorn still remained a thin bird, not really suitable as table fare at all.

The crosses somehow managed to find their way back to the US where the larger size made it more acceptable to the budding poultry industry around 1910.

After a short while, the Leghorn lovers were divided into two rival groups – those who admired the chicken as it was naturally and those who appreciated production over everything else.

Even till today, the division still exists with the original Leghorn preserved by a few individual breeders. The larger numbers of Leghorns today are raised to be industrial hens.

I know it will come s as a surprise to you that the Leghorn actually comes in a variety of colors – White is the main color a lot of people think of when they think of a Leghorn.

Their wattles are read and either a rose comb or a single comb. White earlobes for this breed signal that they lay white eggs.

Eyes are red/orange and the beak is yellow in color. They also have yellow legs and skin; the feet have 4 toes.

The general appearance can be said to be long, sleek and aerodynamic – except for that single comb which portrays the bird as a slight comical character.

In 1874, The first members of the Leghorn family were admitted to the American Poultry Association.

The designation is clean legged, Rose or single comb, , standard or bantam, and Mediterranean class.

The Italian Association (IA) recognizes 10 standard varieties, but do not recognize rose combs.

The standard fowl has a weight of 7½lb for males and 5-6lb for hens. The bantams weigh about 1kg for males 0.9kg for hens.

As expected, these is some slight difference in weights between the various associations of each country across the globe.

The white Leghorn hen and rooster is an intelligent bird. It is quite resourceful and can find its own food if allowed to free range.

They are a smart, busy and active bird that loves to forage. They are great flyers and will roost in trees when allowed to. They do not like to be quiet and can get loud, so this is not for you if you have an urban backyard.

Although they handle confinement well, try to provide them with things to do abd enough room for them to explore – they get bored easily because they are a high energy bird. They are known for being noisy and flighty (but this too will vary from one bird to another).

It is hard to generalize in a breed that has different varieties because not all birds are created the same. Your best shot at judging what your chicks may grow up like is to see the parents if possible or ask the seller what kind of temperaments they have.

Leghorns chicks handled frequently will become amenable to humans, but do not expect to make them lap chickens. 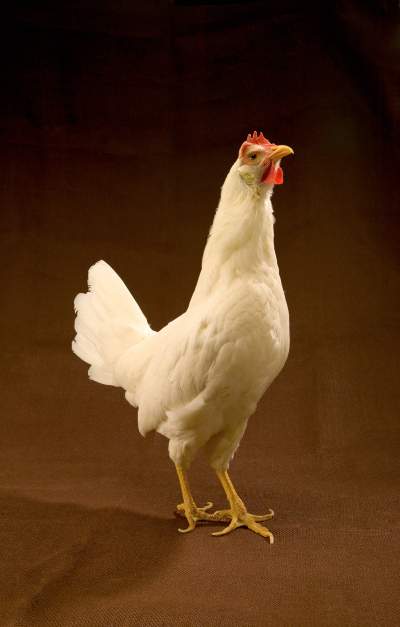 This chicken came has its origin from the Port of Leghorn in Italy and only arrived I Britain in the late 1800s in the white form followed by the brown. Over the years, they were able to adapt to situations and proven to be really productive.

Egg Facts:  Medium and White. Per year, they lay around 280 Eggs on an average – Capable of 320 Annually

Features: They have yellow legs, white earlobes, and the eye is red in all colors. The females have double folded comb, a deep abdomen and a whipped tail. The beak is stout and hort plus the eyes are prominent.

The wattles are long, thin and fine in texture The Earlobes are well defined and their legs are long and featherless with 4 toes on each feet with a long straight back toe and the feathers on the body are soft and silk-like.

Backyard behaviour: They are hardy during winter. They are also not docile in behavior.

Personality: They are sprightly, alert birds and can be tamed to an extent. However, they do not like to be handled and will prefer to remain aloof. They have a reputation for being noisy.

Female: Medium sized wattles with oval earlobes that are close to the head.

Color: Other varieties such as the mottled and cuckoo are recognized outside the US, but not by the ABA or APA at this period.. Beak, toes and shanks are yellow, unless otherwise noted, with red eyes.

Dominique: Rose Comb only. The feathers are barred in black and creamy white over the entire body. Males may be a shade lighter than females. Under color for both is slate.

Exchequer: Both single and rose comb varieties with white and black, fairly distributed across the body.

Special Qualities: Early to mature and an excellent layer of large eggs.

This breed has 12 color varieties, but the white Leghorn hen often lay more eggs than the rest. Leghorn chickens have an average annual production of approximately 200 eggs, but it can go up to 280 eggs.

The eggs weight carries about 55-67 grams and has a white shell. 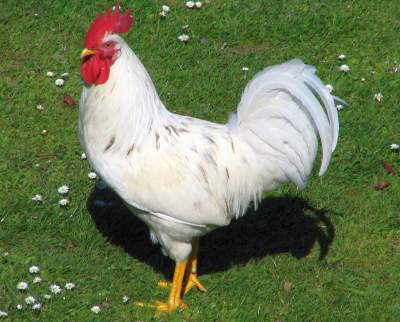 How To Breed White Leghorn Chicken

To breed a White Leghorn hen, make a male mate her.

They often lay more eggs than just an average hen, and rarely go broody. If you want to raise white Leghorn chicks from eggs, then, you’ll need to make use of an incubator or slip fertilized eggs under a brooding hen of another breed.

Only on rare occasions will you find a white leghorn hen going broody. 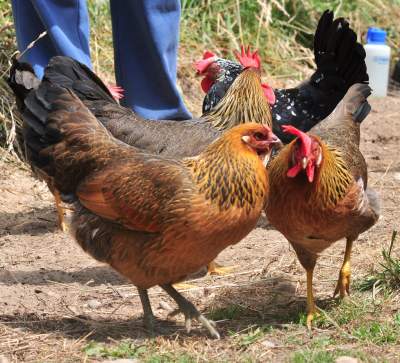 Leghorns are great layers of white eggs, churning an average of 280 eggs per year and at time searching 300-320. They have a good feed-to-egg conversion ratio, needing around 125 grams per day of feed.

The rooster is often slim-bodied with long tail feathers and a large single comb (a picture of the typical male Leghorn).

A good hen will lay white egg but will most likely not desire to hatch them as this gene has been bred out of them. The light weight of this Mediterranean breed (males reach 6 pounds and females 4 1/2) makes it a poor choice if you are seeking a bird to provide meat for the table, although excess males can be used as fryers.

A too upright tail an too much black in tail feathers also mean that you have a brown Leghorn. A Welsummer tail should never have White earlobes.

Here is the standard for the Welsummers:

In Both Colors and Sexes

Comb other than single or with side sprigs. White in lobe, excessive white in plumage. Fetahers between toes or legs and hocks.

More toes than 4. Saddle of male or striping in neck hackle. Whoel red breast or ablsolute black in the male. Salmon breast in the female.

Legs having other colors rather than yellow. Duck or badly crooked toes.Any body deformity, coarseness, beefiness and anything which interferes with the productiveness and general utility of the breed.

If they lay stark white eggs they will be straight Leghorns. Welsummers should lay brown eggs.

The White Leghorn hen is a real favorite of the industrial poultry concerns. She will lay eggs between 280-320 eggs each year. This translates to 4+ eggs per week.

They often lay well into their 3rd or 4th year too.

She lays white shelled eggs which gets larger the older she becomes.

The chicks are fast maturing.

The White Leghorn hen is a robust and active hen that has no “common” health issues so to say.

During winter, you might need to buy a jar of Vaseline to prevent frostbite on their combs and wattles. An alternative fic might be to get the rose comb varieties..

Is The Leghorn Right for You?

They evolved as feral landrace birds and have retained some of that independence.

On the other hand, if you love to have a hen that is a regular and prolific layer and doesn’t consume much – the Leghorn is your bird! The feed to egg ratio is one of the best around, it gets even better if they can free range.

Because Leghorns can be shy, flighty, or nervous, I wouldn’t advise to leave small children near them without supervision.

The White Leghorn hen is a pretty bird, well designed and sleek in stature.

It’s ability in egg laying department has unfortunately led to it being one of the most abused chickens in the poultry industry.

A bigger number of the hens that are Industrial ladies get a second chance at life if they can be rehomed in backyard flocks.

We hope you have enough reasons to buy white Leghorn hen now.

If you have taken in some of these white Leghorn hen or ladies, tell us by commenting your story please in the comments section below…